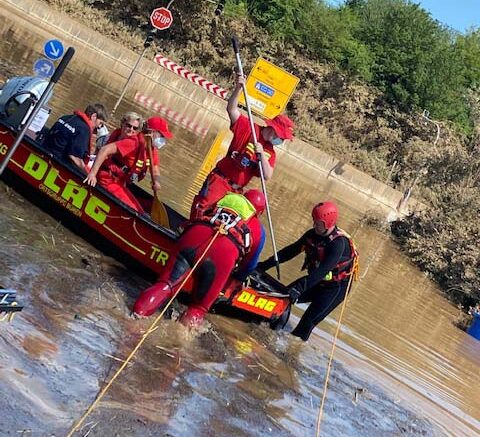 ILSE mourns the victims of the flood disaster in regions of Germany, Belgium, The Netherlands, Austria and Switzerland.

In the past days some of the countries of ILSE Members in Europe were affected by floodings caused by extreme torrential rain. The scale of the destruction is unimaginable and the high loss of life is of great concern..

After several days of heavy rain, rivers swelled up to whitewater and destroyed hundreds of homes and made thousands of people homeless.

With more than 160 deaths alone in Germany, and hundreds more people still unaccounted for the German Lifesaving Federation, the DLRG, has been very active in trying to save lives and help their fellow citizens.

This report from our colleagues at the DLRG shows the scale of the ongoing operations:

ILSE passed on the deepest sympathy to the families and relatives of those people in Austria, Belgium, Germany, The Netherlands and Switzerland who had lost their lives and homes in the floods.

Lifesaving colleagues in Austria, Belgium, The Netherlands and Switzerland are also continuing to assist in saving lives in the flood damaged areas.

On behalf of the DLRG Board I like to express the warmest thanks as Vice President of DLRG for many emails and letters of sympathy I have received from ILS Member Federations and individuals. Some of them offered personal aid already in the first hours of the disaster. I wish to express the very personal thank and greetings also from the DLRG President Achim Haag himself. He has been affected in a certain manner because he was for a long time until last year Mayor of eight of these villages which are now totally destroyed. Only ten meters height left and his home would have been washed away too. So we have very personal impressions and emotional reports about the situation.

The upcoming first World Drowning Prevention Day on Sunday 25th July became for ILSE a special importance by this flood disaster. It showed the world how important drowning and disaster prevention will be in the future to protect and to save lives.